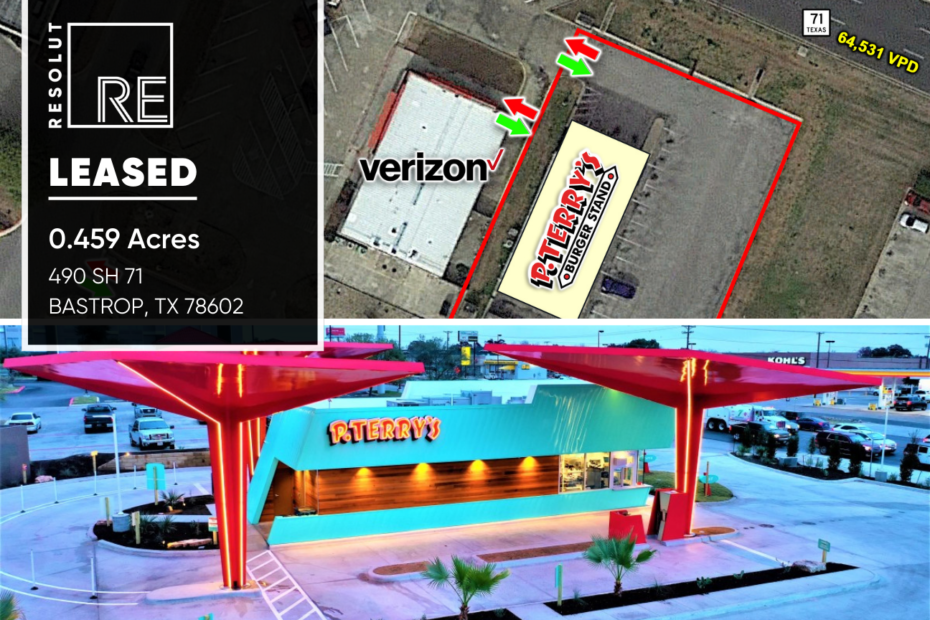 Highlight: P. Terry’s Burger Stand has leased 0.459 acres in Bastrop, Texas, on a WalMart anchored pad site on the frontage road of Highway 71. This location was formerly a Payless Shoe Source, but will soon be torn down to make way for P. Terry’s unique architecture and design. Special shoutout to Michael Noteboom and Davis Paone, of our RESOLUT RE Austin office, who represented the landlord in the deal. Can’t wait to see the new P. Terry’s in Bastrop!

Congratulations to Perspire Sauna Studio on their new 2,025 sf location at 525 Cedar Hill Avenue in Wyckoff, New Jersey from RESOLUT RE! For more information, contact Davis Paone of RESOLUT RE of RESOLUT RE at 804.928.7733

An undisclosed buyer has purchased the 48,676 sf office building at 4445 West Ledbetter Drive in Dallas. Brian Clayton and Brian Sladek of RESOLUT RE represented the Seller. Caleb McCoy of JLL represented the Buyer.

Cesar Juarez has leased 5,600 sf at 11395 Shaenfield Road in San Antonio. Carlos Gruber of RESOLUT RE represented the Landlord.