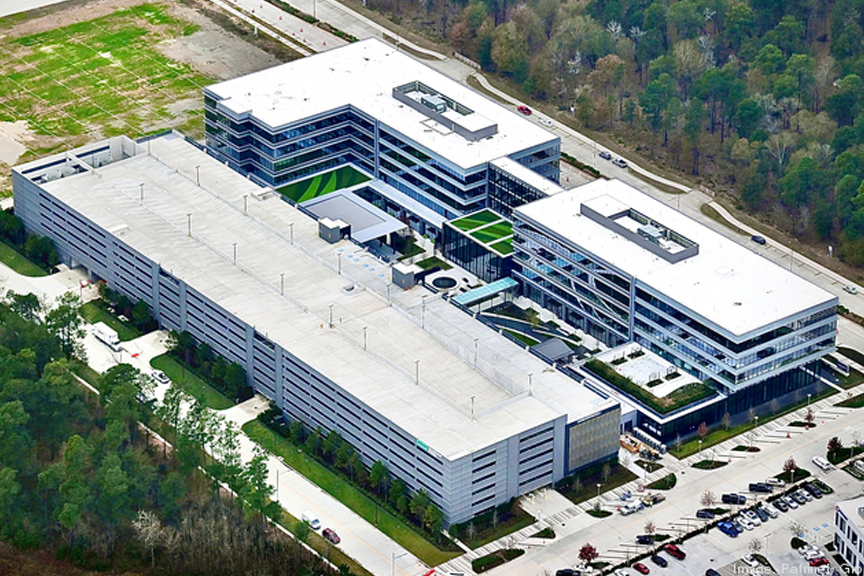 Hewlett Packard Enterprise (NYSE: HPE) said its new headquarters in City Place in the Spring area opened for employees on Feb. 14, and the company plans a grand opening celebration “in a month or two.”

Employees are not compelled to work in the office as Hewlett Packard is operating under a hybrid model, HPE spokesman Adam Bauer told the Houston Business Journal. However, those who choose to must be vaccinated against Covid-19, per the company’s vaccination policy.

HPE is leasing the campus from CDC Houston, a subsidiary of New York City-based Coventry Development Corp. CDC Houston is also the developer of the City Place master-planned community, which was known as Springwoods Village until last summer. The developer announced Feb. 15 that it has assumed full ownership of the HPE building after acquiring all interests from its joint venture partners for an undisclosed amount.

The companies started developing the HPE campus, located at 1701 East Mossy Oaks Road, in February 2020. It consists of two five-story buildings totaling 440,000 square feet of rentable space and is connected by bridges at each level.

“Reaching this campus milestone is a testament to the strength and capabilities of our partnership with Patrinely Group and USAA Real Estate, which has proven itself time and again in its abilities to thoughtfully and efficiently deliver large scale, premium projects in a location that has become one of Houston’s top corporate campus hubs,” he said.

Coventry announced plans for the master-planned community in 2010, after Irving, Texas-based Exxon Mobil Corp. (NYSE: XOM) had acquired land for its campus there. Last month, Exxon announced it would make its 385-acre City Place campus its official headquarters.

The master-planned community now has a daytime workforce of about 21,000 employees, according to Coventry, and more than 1,000 residents, with more residential development underway.

In December 2020, HPE announced that it would move its headquarters from San Jose, California, to its then-developing City Place campus, citing “business needs, opportunities for cost savings and team members’ preferences about the future of work.”

The San Jose campus will remain as a technology and innovation hub, the company said at the time.