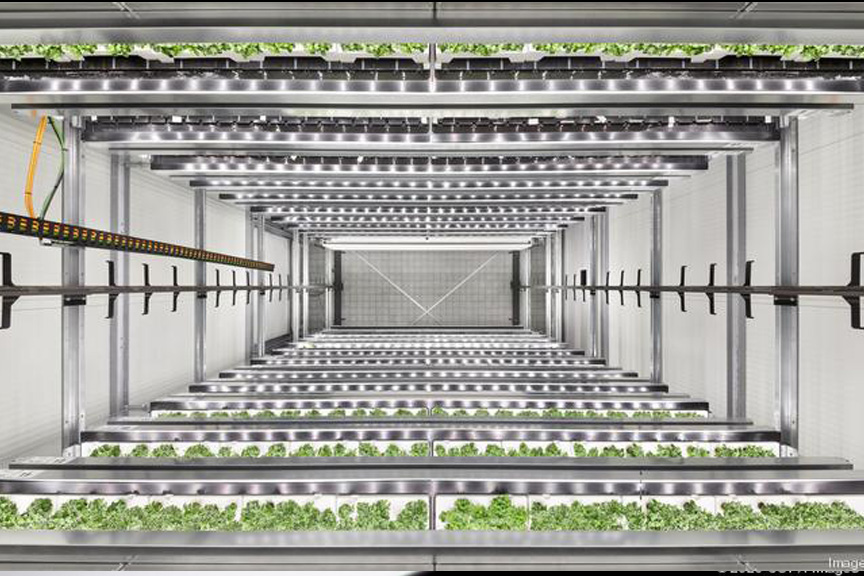 Infarm – A fast-growing, billion-dollar urban farming company based in Europe is opening its second U.S. growing center in Kyle as the area becomes a hotbed for sustainable farming.

Infarm and the city of Kyle’s economic development department announced on Feb. 9 that the company will occupy a 73,000-square-foot space at the Plum Creek Industrial Center at 19200 Marketplace Ave. That’s roughly the size of an H-E-B grocery store.

Infarm will employ about 30 people and open within six months.

The move to Kyle comes on the heels of a December announcement that the company – which is headquartered in Berlin, but has its operating entities embedded in a holding company, Infarm Indoor Urban Farming B.V., which is registered in the Netherlands – had raised $200 million as part of a series D funding round and topped $1 billion in valuation.

The company, which was founded in 2013, said it plans to use the money to expand its operations from its current 17 growing centers to 100 locations in 20 countries by 2030, including 30 facilities in the United States. The company’s first U.S. growing center opened in Seattle in 2019, and the company has existing plans to add five more in the U.S. – the Kyle site and four other at undetermined locations – totaling 500,000 square feet.

Company officials said in an email response that the Kyle site will have about 40,000 square feet of growing capacity. They said the site will primarily be used to grow salads from its catalog of more than 75 plants and will produce more than 2.2 million pounds of salad every year.

“The U.S. plays a significant role in our global expansion plans. Opening our next Growing Centre (sic) in Texas is strategically important for Infarm as Texas and the region around Austin are high-potential markets for our fresh produce,” CEO and co-founder Erez Galonska said in a statement. “When fully equipped, the Growing Center will be able to feed more than 18 million people living in the Texas Triangle, bringing fresh produce from our controlled, localized systems that minimize climate and supply chain risk by growing food reliably 24/7, 365 days per year close to consumers.”

Infarm is not the first urban farming company to announce big plans south of Austin in recent months. Iron Ox Inc., the Silicon Valley-based company building a robotic farm in Lockhart, officially announced last month its plans for a second facility in the city. Its produce is expected to hit Texas grocery stores early this year.

Infarm’s expansion to Kyle – located about 20 miles south of Austin – marks another economic win for the city, which has ranked among the fastest-growing cities in the country over the past two decades, growing from 5,314 residents in 2000 to 45,697 in 2020, according to U.S. Census Bureau data.

That rapid expansion has attracted a number of companies to the city, including to the Plum Creek Industrial Center, which is being developed by Kansas City-based NorthPoint Development LLC and is eventually expected to total four buildings and 935,000 square feet. A ribbon-cutting was held in November to celebrate the opening of the first two buildings, totaling about 1,000 jobs. Companies operating there include Plastikon Industries Inc., a plastic parts manufacturer that supplies Tesla Inc. and Toyota Motor Corp., and Outer Aisle Gourmet LLC, maker of low-carb bread products.

Infarm officials said they were interested in Kyle because “the food scene in Texas is famously vibrant.” They said the decision was sealed based on support from the city, the potential of the area, and the company’s growth strategy, as well as the ability to sell the freshly grown produce in nearby cities including Austin, Houston, San Antonio and Dallas.

“We are beyond proud to welcome Infarm to the city of Kyle,” Kyle Mayor Travis Mitchell said in a statement. “Agri-Tech innovations are of growing importance for our food systems and supply. That’s why it’s great to see a global vertical farming leader investing in the region and setting up business in Kyle, creating jobs, and making even more sustainably sourced, fresh, local produce available to our region.”

The Kyle location will be equipped with the company’s modular large-scale farming units, which are up to 33-feet tall and require only 430 square feet of ground space. They produce the crop equivalent of land the size of a soccer field and use 95% less water and 95% less land compared to traditional soil-based agriculture. Infarm estimates that it has saved 16 million gallons of water and 600,000 square feet of land to date as part of its worldwide operations.

Further expansion in the Austin area is not expected – but not completely ruled out.

“At the moment, we don’t have plans to open additional growing centers in the region but with our scalable and modular technology, we are able to react to increased market demand quickly,” officials said.

Infarm currently has a presence in 11 countries and has agreements with retailers, including Kroger, Safeway and Thrifty Foods, that bring its products to roughly 1,850 stores worldwide. The company’s crop catalogue will soon include fruits, including peppers, cherry tomatoes and peas.

The company also boasted that it has plans to expand to the Middle East, as investors in its most recent funding round included Partners in Equity, Hanaco, Atomico, Lightrock, Bonnier and the Qatar Investment Authority. The latter investor will help Infarm open its first growing center in Qatar in 2023, where will initially grow salads, before expanding to include fruits; the country imports much of its food due its arid climate.